Most people know that hydrogen peroxide (or H2O2) is a great household cleaner and disinfectant. But what about using it to sanitize your hot tub?

Perhaps you've heard that it can be used an alternative to chlorine or bromine to help keep your water clean and bacteria-free. And, well, there is some truth to this.

However, there are also risks associated with using hydrogen peroxide in a hot tub, so it's important to understand both the benefits and dangers before deciding whether or not to add this chemical to your spa water.

Is hydrogen peroxide an alternative to chlorine or bromine?

Hydrogen peroxide is often used as a disinfectant, but it is important to understand that it is not an approved sanitizer for hot tubs—at least not on its own. Hydrogen peroxide is actually just an oxidizer, which means that it breaks down into oxygen and water on contact with organic matter.

This does mean, however, that it can be used as the oxidizer in a biguanide sanitizing system.

Biguanides are a class of chemical sanitizers that can be used in swimming pools and hot tubs. These products are non-chlorine and non-bromine, and the main benefit is that they can provide effective sanitation without any harsh smell.

Biguanides are available in a variety of brands, such as Baquacil, Baqua-Spa, Soft-Swim, and Revacil.

These products work by killing bacteria and other microorganisms in the water, keeping the pool or hot tub clean and safe for use. While biguanides are more expensive than chlorine or bromine, the theory is that they provide a gentler alternative for keeping pools and spas clean. When used together, hydrogen peroxide and biguanides can provide an effective way to clean and sanitize a hot tub.

Although it might sound appealing as a way to avoid using chlorine or bromine, biguanide is actually not common as a sanitation method among spa owners, mostly due to the greater expense and unpredictable results when compared to the other more common sanitizers (chlorine and bromine).

The problems with using hydrogen peroxide in a hot tub

Although some spa owners have attempted to experiment with using hydrogen peroxide to sanitize their spas (see this thread for some examples!) you will see that most have failed to maintain it for more than a month or so without running into problems.

Here are the main reasons I don't recommend it for most people:

If you're going to be working with this type of hydrogen peroxide, it's important to take appropriate safety precautions:

It goes without saying that this substance should never be within reach of pets or children.

Hydrogen peroxide dissipates faster than chlorine or bromine, so it's much harder to maintain it at a stable level. You would need to maintain a level of around 100ppm H202 in a spa, but it's not uncommon for this to drop to zero in just a couple of days, at which point bacteria can take over your hot tub.

This is why people trying to use hydrogen peroxide in their spas often suddenly notice cloudiness, slime, biofilm, or white water mold (or even just an unpleasant musty smell) after a few weeks of thinking they've figured out a successful sanitation routine.

Many spa manufacturers will recommend against using H202 in their tubs, and that's because it can break down natural rubber, as well as the intended organic materials.

If there's any natural rubber in your spa, adding hydrogen peroxide to the water can cause the rubber to break down and melt. This can damage o-rings, gaskets, and seals, which may eventually cause leaks.

If you're not sure whether your spa contains natural rubber, it's best to avoid using hydrogen peroxide. Chlorine or bromine won't damage your spa's components, and are both effective at sanitizing hot tubs when used properly.

Can you use hydrogen peroxide to lower chlorine in a hot tub?

In theory, you could use hydrogen peroxide to lower chlorine levels in a hot tub. However, there are much better methods to achieve this. It's important to be aware that hydrogen peroxide will also lower the pH of the water, potentially creating an imbalance that could be harmful to both bathers and the equipment.

The best way to lower chlorine in a hot tub is actually to just leave the cover off and wait.

If you really can't wait, there are other products on the market that are better designed to lower chlorine levels without affecting pH, so in most cases, it's best to stick with those. You're looking for products that contain sodium thiosulphate: 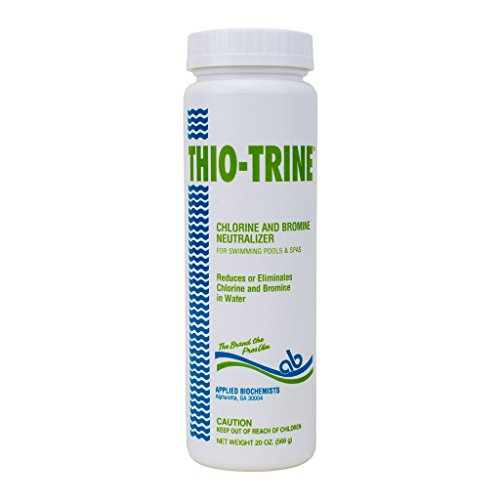 If you are one of the brave souls who have experimented with using hydrogen peroxide as your only sanitizer, or even in a biguanide spa care system, we salute you.

Although hydrogen peroxide is an effective oxidizer, it is difficult to maintain at the correct level in a hot tub, and can be hazardous to work with. It may also be corrosive to your spa in certain cases.

For these reasons, we recommend sticking with chlorine or bromine as the sanitizer in your spa care routine. For most people, this will be more effective and less risky.

I have full guides on how to use bromine or chlorine in your spa, based on my experience over the years.