It's hard to beat the convenience of an inflatable hot tub. These spas are easy to transport, set up, and store. They can also be inflated in under 10 minutes. But what if you need a spa for a large family or group of friends?

The largest inflatable hot tub currently on the market is 85 inches in diameter and 28 inches tall. There are actually two manufacturers who make spas in this size: Intex and Bestway.

The PureSpa range by Intex and the St. Moritz SaluSpa by Bestway are all large inflatable spas that will work well for entertaining, families, or groups. If you need a hot tub for up to 5-7 people or want to host parties, one of these models could be just what you're looking for.

We'll take a look at each of them to see what they have to offer (and consider if one brand has an edge over the other). 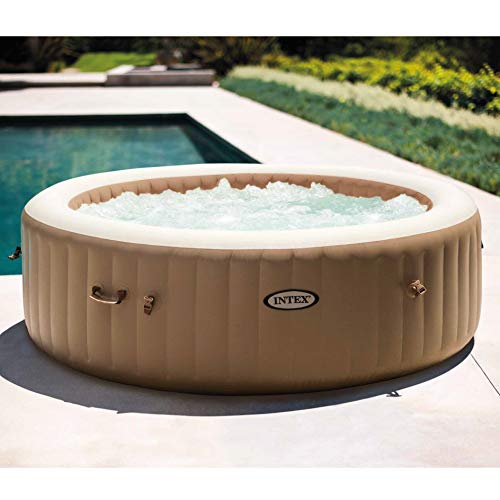 The most basic of the Intex models, the PureSpa is an inflatable hot tub that offers a comfortable soaking experience.

This model comes with all the features you'd expect in any inflatable spa, including 140 bubble jets, heater, locking cover, chlorine dispenser, plus two filter cartridges to keep your water clean.

It also comes with a bag for easy storage if you decide you want your patio space back, and an insulated ground cloth to keep your spa's base clean and safe from heat loss or sharp objects. 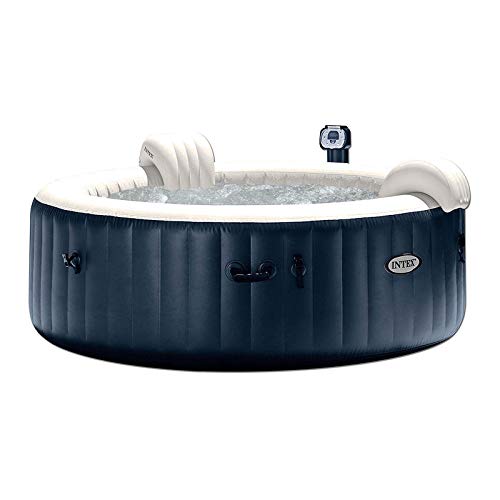 The PureSpa Plus is a step up from the basic PureSpa model. This one has 170 bubble jets, plus it comes with two headrests and an LED light. The headrests are a little notorious for not staying in place on these spas, but you may or may not have this problem. At least they're included for free.

Other than that, you get the same dimensions of spa to soak in and all the same extras included, but the spa is a Cobalt Blue color (which you may prefer to the Tan of the basic model). 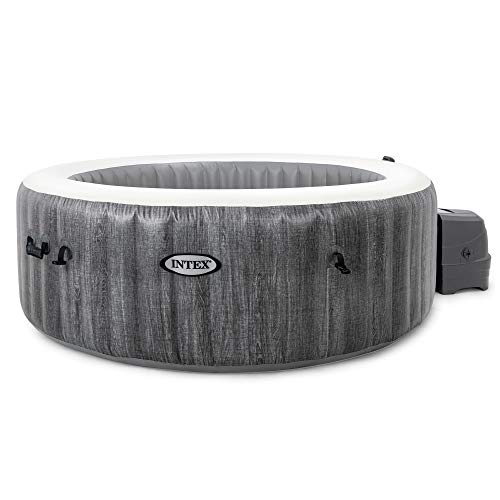 The Greywood Deluxe is the newest of the three Intex models and adds a touch of elegance with its woodgrain pattern. This model may come at an increased price (though not necessarily, it's worth shopping around for the best deal) and it has most of the same features as the PureSpa Plus, including 170 bubble jets, LED light, heater, cover etc.

The main differences between this and the Plus are a more modern pump so it's quieter when running, and a new detachable control panel. You can remove the control unit and place it on top of the spa so you don't have to reach so far to adjust the jets and temperature.

Aside from the updated color and design, this spa also comes with "premium foam headrests" instead of the inflatable ones which are supposed to be an improved design. 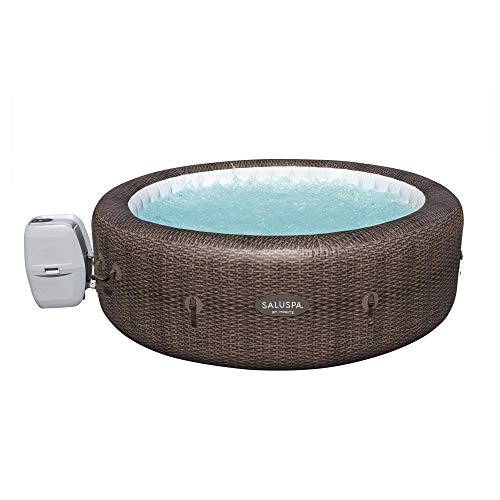 The largest SaluSpa by diameter, the St. Moritz has about 6 feet of interior space. The "AirJet" system has the most jets of all the spas featured—180 to be exact—which release bubbles to massage your body.

This is another large inflatable spa that's very similar to the Intex models in that it comes with pretty much everything you need (you just need to buy startup chemicals).

You don't get any LED lights or headrests with this one, but the St. Moritz does come with a chlorine dispenser and two filter cartridges for water treatment. The pump is also used for inflating, heating up, and filtering the hot tub, so no extra tools are needed which is nice when you're eager to get set up quickly.

Check out my ultimate guide to spa lighting which features several smart ideas for adding extra lights if your spa doesn't have enough.

Finally, the rattan wicker print makes it look expensive, even though it's actually common to find this spa a little cheaper than the Intex models.

What is the best large inflatable spa?

If you're looking for one of the largest inflatable spas available today, all of these models will give you the same dimensions, and all come with most of what you need to get started immediately—it just comes down to which extras you want and which one you can find the best deal on.

If you go for an Intex, I would say it's worth looking for the Greywood Deluxe model if you can find it, to get the quieter pump technology and the upgraded detachable control panel.

One other plus for Intex is their inflation system. If you need to add more air while the tub is in use, there is a bypass on the pump. You can attach the inflator hose to this, and it then lets you divert air from the pump into the tub or cover to add more air, without having to disconnect the pump from the spa—pretty handy!

That said, the St. Moritz SaluSpa is also an all-around great buy. It has fewer extras thrown in free of charge, but you can get most of the same accessories separately on Amazon if you want them.

What is the deepest inflatable spa?

What if it's not diameter you care about, but depth instead?

The deepest inflatable hot tub is the Grand Rapids inflatable spa by the Canadian Spa Company. At 29 inches, it's an inch deeper than other inflatable spas which are only 25-28 inches deep on average.

The other thing that's special about this spa is that it's the only inflatable that can be used year-round in cold climates. Other inflatable spas cannot be used in temperatures below 40°F, so you have to pack them away for the winter.

That's too bad because hot tubs are especially great in the winter, when you want that bubbling hot water as a contrast to the freezing temperatures.

The first benefit inflatable spas have over a similar sized traditional model is price. Many people cannot afford an expensive hardshell spa because they cost thousands of dollars—and need to have a professional install them as well. An inflatable hot tub on the other hand (yes, even the largest one!) costs just a few hundred dollars which makes it much more affordable for most individuals or families looking for a little taste of luxury.

Another reason is that they are portable. Traditional hardshell spas cannot be easily moved, and also take up lots of space (especially in a smaller backyard)—but an inflatable spa can simply be drained, dried, and deflated when you're done with it. So if you're renting or maybe just want a hot tub for occasional use, then look no further. If you move, you can just take it with you so it won't be a waste of money due to being left behind. You could even have multiple spas for different occasions if you wanted!

Finally, inflatable hot tubs are the ultimate backyard accessory if you like entertaining. Whether it's for a BBQ, football game day, or just to relax on the weekend, having friends over is always more fun when you have an inflatable spa! And if you like to socialize with more than a couple of friends, it's worth getting a model that can hold more than two people.

What are the downsides of large inflatable spas?

Of course, the larger the inflatable hot tub is, the more expensive it will be to run and maintain. If you want a less expensive option that's still large enough for family or small group use, one of the more popular smaller models (for around 3 people) is the St. Lucia from Bestway: 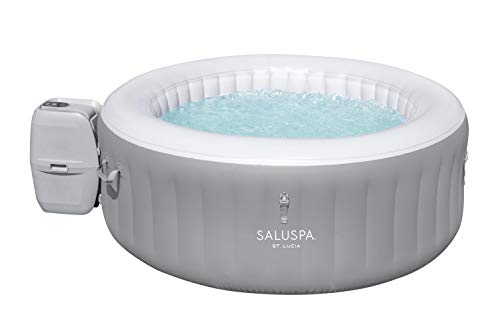 You also need to bear in mind that a large inflatable spa will still take up considerable space on your deck or patio. Their footprint is bigger than that of smaller models—and in some cases even bigger than a hardshell spa! If you have this kind of space available, you might want to consider a rotomolded or acrylic spa for better durability.

Lastly, even a large model is still going to be an inflatable spa. That means it will have no molded seats (yes, you'll have to sit on the floor). And while the maximum capacity is technically 7 people, actually getting that many in will be a squeeze, and not very comfortable by most people's standards.

As a guide, a six-person spa will be great for two people, good enough to enjoy with a couple of friends, and can accommodate four individuals. More than four might be pushing the limits though!

Once you take all the benefits into consideration, owning a large inflatable hot tub can still be a great investment for anyone who wants a fun way to relax with friends or family at home—without breaking the bank.